The HBCU Digest has announced its 2018 HBCU Executive Media Summit and HBCU Awards Gala ceremony to be held on June 22 at the Renaissance Baltimore Harborplace Hotel beginning at 6:00 p.m.

According to the HBCU Digest, North Carolina’s historically secured 25 spots in this year’s 2018 HBCU Awards finalist ballot, the most ever for one state in the eight-year history of the awards gala.

2017 HBCU President of the Year and Central State University President Cynthia Jackson-Hammond returns seeking to become the first two-time winner of the individual award and first HBCU of the Year award winner in consecutive years.

Dr. Harvey, who will complete his 40th year as Hampton president this year, will be honored during this year’s ceremony as the recipient of the Lifetime Achievement award, which will also be formally named in his honor during the awards gala.

The HBCU Awards is the first and only national awards ceremony honoring individual and institutional achievement at historically black colleges and universities throughout the country. Winners are selected by a panel of previous winners, journalist, HBCU executives, students and alumni for the merit of accomplishment and for generating positive coverage for HBCU campus communities.

The HBCU Digest has announced its 2017 HBCU Executive Media Training Institute and seventh annual HBCU Awards ceremony to be held July 13-14th in Washington, D.C’.s Gallup Building beginning at 7:00 p.m. HBCU Digest, is the national news resource of record for historically black colleges and universities. Designed to engage the national HBCU community in media literacy and development strategies, the Institute provides best practices in media culture building for HBCU communities from around the nation. Through dialog with practicing journalist, administrators, PR professionals, and student media leaders, the Institute assists in providing the tools for HBCUs of all sizes and mission to develop a comprehensive campus media strategy.

The HBCU awards acknowledges and celebrates achievement at historically black colleges and universities throughout the United States. Crowning winners in the fields of leadership, arts, athletics, research, and community engagement, the HBCU Awards is the first and only event to recognize the influence and impact of HBCUs on American culture.

The finalists were selected from more than 175 nominations from HBCUs across the country. Winners will be announced on the evening of the awards, and tickets for the awards and executive media training summit are available here. Seating for the event is limited.

Male Alumnus of the Year

Female Alumnus of the Year

National Alumni Association of the Year

Female Coach of the Year

Male Coach of the Year

Female Athlete of the Year

Male Athlete of the Year

Women’s Team of the Year

Men’s Team of the Year

Female Student of the Year

Male Student of the Year

Female Faculty Member of the Year

Male Faculty Member of the Year

Female President of the Year

Male President of the Year

Historically Black College/University of the Year

LITTLE ROCK, AR – Writer, HBCU alum, Civil Rights and prominent Black Lives Matter activist Shaun King will serve as the keynote speaker at a community event entitled “#BlackLivesMatter in the Media.” This free and open to the public event will take place on Friday, September 30, 2016 at 5:30 pm in the M.L. Harris Auditorium on the campus of Philander Smith College.

A 2002 graduate of Morehouse College, King is best known for his work as a senior justice writer for the New York Daily News. His job focuses on reporting and commentary on justice, police brutality and race relations.

King will be joined by Malik Saafir, founder and president of the Janus Institute for Justice. Saafir will moderate the panel discussion between activist including Little Rock’s own Rae Nelson. One of the panelist, Ashley Yates, was an organizer in Ferguson during the aftermath of the shooting of Michael Brown.

If you wish to attend this event, you can RSVP by visiting the event Facebook page. 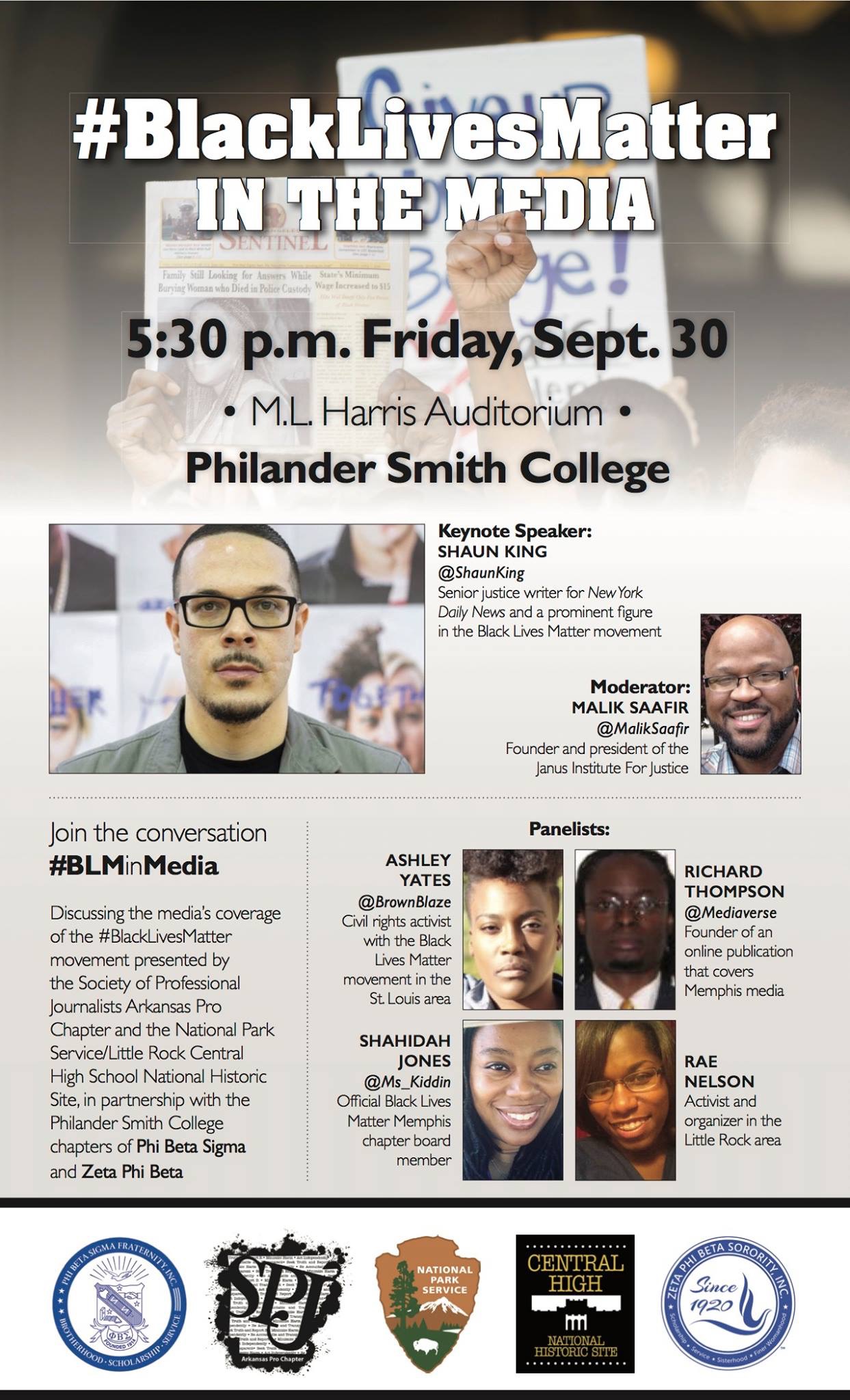