PINE BLUFF, AR – The University of Arkansas at Pine Bluff’s Office of Career Services hosts its 43rd Annual Youth Motivation Task Force (YMTF) Program February 28-March 1, 2016. YMTF has become one of the most significant and exhilarating programs provided for UAPB students with the goal of encouraging them to take full advantage of the benefits available, given guidance on how to succeed in their careers, and look at life in the real world of work through the experiences of seasoned professionals. Several consultants representing the private sector, government agencies, and educational institutions will spend two and a half days on the campus of the University of Arkansas at Pine Bluff. The consultants will speak to students in classrooms, present panel discussions, conduct a “keep it real” workshop, federal resume workshop and one-on-one sessions to help prepare students for success in the classrooms as well as in the workplace. More than sixty students are selected to serve as student liaisons, program participants, and ushers.

This year’s YMTF theme is “REBOOT FOR SUCCESS – CONTROL yourself, Look for ALTERnative solutions and DELETE situations that give you tension and negative energy.”

Kicking off with “Keeping it Real” Workshop on Monday, February 29th, which will offer participants the opportunity to engage in real conversation with seasoned professions, ask those top-of-mind questions and receive no-nonsense advice, and will be held from 3 p.m. until 4:30 p.m. in the STEM Building Conference Room on campus. 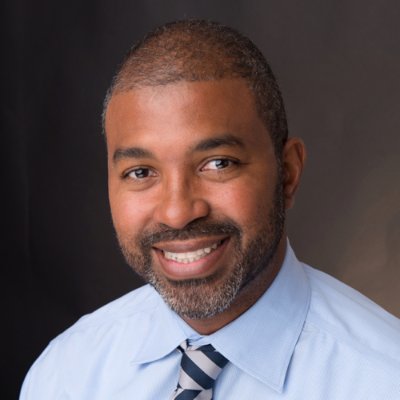 Followed by the YMTF Assembly on Tuesday, March 1st, at 11:00 a.m. in the Hathaway-Howard Fine Arts Auditorium on campus, which features keynote speaker Omar Karim, president and founder of Banneker Ventures. Karim is a Howard University graduate, receiving his Bachelor of Science degree in Mechanical Engineering as well as his Juris Doctoral degree from the Howard University School of Law. Karim became the first undergraduate student to serve two terms on the university’s board of trustees.

Since the inception of the company in 2005, Karim has been president of Banneker Ventures, a construction and facilities management firm in the metropolitan Washington, D.C., region.

The company provides general contracting, construction management, real estate development and facilities management services to federal government, local government and commercial clients across five offices throughout the United States. Since its founding, Karim has been responsible for the company winning more than $250 million in contract vehicles with 2015 revenues nearly $20 million.

After the assembly that same day, a Federal Resume Workshop will be held and hosted by the U.S. Forest Service from 3 p.m. until 4:30 p.m., located in the Cross-Phipps Auditorium of Caldwell Hall on campus. This workshop will provide knowledge on how to prepare a federal resume when applying for a government position. 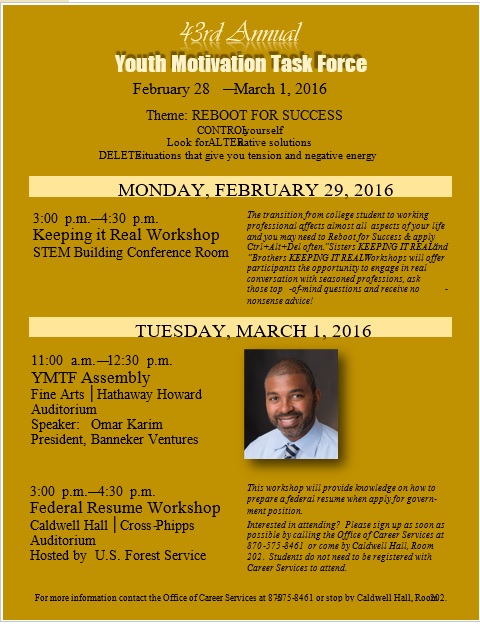 HISTORY OF YMTF at UAPB
During the 1960’s when minorities were still feeling the pitch of segregation, and they had limited access to non-traditional jobs, the National Alliance of Business was created. This organization was established in 1986 under the influence of the late President Lyndon B. Johnson. The National Alliance of Business had two major components – the College/Industry Cluster Program and the Youth Motivational Task Force Program. The latter, commonly referred to as YMTF, was geared toward motivating minority students to excel to the best of their abilities and to encourage them to look at career options other than teaching and general liberal arts.

This was no easy task for the early pioneers of YMTF. Many times they had to reassure the professors that they were not trying to decrease the number of majors in their departments, but to increase the career opportunities of minority graduates. The first group of participants for the Youth Motivational Task Force: Mr George Turner, Consumers Power Company; Mr. Georde Walker, IBM; Ms. Florida Morehead, Dow Chemical; Ms. Loretta Lever, Southwestern Bell Telephone; Mr. Arnold Thomas, McDonnell Douglas Corporation; Mr. Warren Ervin, Allstate Insurance; and Ms. Barbara Hudson, National Alliance of Business, was the coordinator.

Mr. H.G. Barnett was Director of Career Planning and Placement, and Mr. Luther Dangerfield was Assistant Director and the campus coordinator for the Youth Motivation Task Force Program.

Through the years, YMTF has grown from eight consultants to more than forty per year and from $500 annual budget to more than $15,000 contributed bu the corporations and agencies that recruit the students and friends of the University of Arkansas at Pine Bluff.

For more information about the YMTF Program or any YMTF 2016 events, contact UAPB’s Office of Career Services at 870-575-8461 or visit their office in Caldwell Hall, Rm. 202.